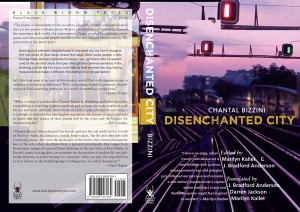 “What a vortex of creation this Chantal Bizzini is, shredding and whirling reality, recombining it, watching it glitter and flash and explode when the touches it with her eye and heart and hand. After too many years of pale, abstract French verse, it is a delight to welcome her into English translation. She knows so much and feels so much that any reader of these poems will be the wiser and the happier for encountering her.”
––Bill Zavatsky

Chantal Bizzini’s Disenchanted City bravely portrays the real world we live in with its “Red-eye flights, skidding/cars, words, broken glass,” but the poet also sees with a visionary glance. She views the landscapes of the twenty-first century through the lens of the arts, where she draws from a personal encyclopedia that ranges from Renaissance images of a pierced Saint Sebastian to the jazz solos of Eric Dolphy. In Bizzini’s poetic looking glass, art translates the devastation of modern life into glittering moments, as in this homage to a musician: “when you play,/the anguish/born to bear witness to the trembling/edges of things/once in a while disappears.”
—Zack Rogow

“Here is an edgy, urban French poet whose wit is shot through with lyricism, whose painterly eye and polyglot jazz- inflected ear perceive and recreate a 21st century impressionist’s capital where both Hart Crane and Walter Benjamin might feel inspired to wander.” ––Marilyn Hacker

The poems in Chantal Bizzini’s new book, Disenchanted City, are urban, personal, complex and sophisticated; they are also poems of displacement. In these poems Bizzini, a visual artist and translator, channels the sometimes dark world of a contemporary France peopled by criminals, immigrants and other marginal people invisible to the eyes of many French citizens. The poet writes in her poem “Jazz;”

“morning in an unknown neighborhood/it’s the same city, but I don’t recognize it/it has zones of dust/large streets the steps climb/some people a little strange make ordinary/gestures/someone calls, someone talks of weather/and of the sky and clouds that pass through/the common existence in the shivering cold/of the first hours;/and little by little we enter this day/having measured what makes it different/because it is the attempt at perception.”

Isn’t this how most of us react in this modern world filled with enigmas, trying to understand and process difference? This is a haunting, beautiful, powerful, disturbing book filled unsettling poems set in a world of unsettling complexities. –Quincy Troupe, co-author of Miles: the Autobiography, Miles Davis with Quincy Troupe, Miles and me and Errançities, poems.