Poems
The Enchanting Verses Review (“Forget the Silk” and “Ravishing”): http://www.theenchantingverses.org/uploads/4/6/1/6/461698/marilyn_kallet_poems.pdf
Forget the Silk
Forget the silk of poppies, their unrelenting red. I could
take you to forgetting, lick amnesia across your lashes,
make you forget half-learned love, forget your name
and the word for blood, caress you with my breasts until you
spill your hair over me and we’re lost in a silkstorm.
Forget the drained desert stars, hold me fast as constellations
you painted on your ceiling as a boy, unfold me like a true map,
wander my sleepless byways. Taste the dark-skinned girl
you used to love coming toward you without sorrow,
surprise the man you mourned hiding blues inside
his hair––we’d be the bridge drumming one world into
another, riding our breaths. Over, under, all around,
crooning our own night chant, finger cries.
Could you bear forgetting this?
Ravishing
Madame says she’s ravished by the tortoise.
I’m jealous.
I can see why Madame is ravie.La
Tortue with her Cutco beak
crawls out when Madame coos,
chomps pissenlit and crawls
back under rock.
I too was ravished by a beast
aeons ago.
Last year. The floating hair,
Dark eyes. Hélas, then
Beatrice showed
and short-circuited
my ravishing.
Madame says she is moved
by intelligent animals,
Me too.
I admire Tortue’s indifference
to my face.
She doesn’t need to be petted,
unlike the dog down the road
who stops by my gate ten times a day.
Madame Tortue circles
The garden edge.
Fourteen years, she’ll never
unlatch the garden gate.
She traps herself
under a flowerpot
never knowing how near
the Vita Nuova waits
next door.
A thrill when she
rounds the corner
again and circulates
Like Wallace Stevens
slo-mo in the sun.
I am almost ravished
by the tortoise,
but hold back just
a toe
in case you come
round the bend
with a sunny bouquet
and a slow hand.

Selected Poems: I Want You Here, Euridice in Nelson County, Fireflies, The Love That Moves Me, That Chicken, Get This Right

I Want You Here

So badly my fingertips ache
roses droop against the stones

the green light of the Garonne
stuns my eyes

I want you here so badly
I can taste your salt

climb to the centre ville
devour the first May cherries

pilgrims
at home in each other

beneath the blue sheet
of sky.

hoarding bread and pad thai.
What to do? Go slow, pray?

“There ain’t been no God of Israel in these parts
since Job was a boy,” Cuz’ said.

The grey man at the end of the driveway leered,
“I told you so.” According to the Nelson County

until the sun came back, or
Orpheus phoned. After all this time,

would she know his voice if the call
went through? She’d made mistakes before.

Soon as the sky cleared, she would find him,
above, or below.

In the dry summer field at nightfall,
fireflies rise like sparks.
Imagine the presence of ghosts
flickering, the ghosts of young friends,
your father nearest in the distance.
This time they carry no sorrow,
no remorse, their presence is so light.
Childhood comes to you,
memories of your street in lamplight,
holding those last moments before bed,
capturing lightning-bugs,
with a blossom of the hand
letting them go. Lightness returns,
an airy motion over the ground
you remember from Ring Around the Rosie.
If you stay, the fireflies become fireflies
again, not part of your stories,
as unaware of you as sleep, being
beautiful and quiet all around you.

The Love that Moves Me
amor me mosse…

Makes me speak. Or is this
some lesser muse, that he-beast
with reeking innards?

Goth, I know!
Why call for answers
if love’s divine?

Why not worship like el maestro,
a glimpse of his beloved?
Beatrice cupped vision in words.

Virgil spoke up.
Had he held still
there would have been no book,

no hell, heaven, souls.
Now every church in Florence has their number,
every schoolgirl.

I’m well past the middle of my life,
less able to cast visions
on a still life.

I won’t scold.
Let’s admire the blank
you have created,

the sea of silence that surrounds you,
the taciturn mountain
you climb daily.

I won’t ask for hello.
That would show lack of faith.
Let the song be my mojo,

the terza save me from wraiths,
rima not take me down.
Be my Virgil if not my angel.

If not my divine amor,
I might settle
for gutsy love.

Was a senior citizen
an octogenarian
the oldest one in Valence d’Agen.
That chicken’s skin was so thick
it couldn’t be insulted.
Nothing could hurt it, not even a knife.
That chicken was so old it knew my Grandma Anna in Minsk.

I made a soup of it,
and with enough hours and white wine
even the oldest clucking citizen of the republic
gave way to my teeth.
With a loaf of olive bread to distract me
I polished off that beast.
But was it a chicken or a buzzard?
Je m’en fous! For fifteen Euros I’d eat a hedgehog
if it landed in my shopping bag.
I’m no spring chicken
but I’m livelier than that old bird.

Non, the alderman said, numéro trois, Place de l’Horloge.
The Jews used to live near the butcher’s,
not the soap shop. I thanked him.
Need to get this right.

Adéle Kurtzweil tried to study there, before the butchery,
before gendarmes seized her.
Get this right. Fleeing Austria, Bruno, Gisele and their daughter
tried to live in Auvillar—their papers in order. After Wansee,

Not the savonnerie. I thanked him.
No mistake. “Kurtzweil. Number 3. Place of the Clock.” 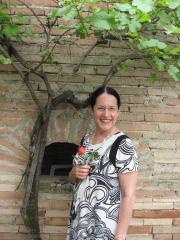